Members of the “Lift the Ban” coalition, together with Our Revolution Lake County, met with Illinois State Representative Rita Mayfield at Representative Mayfield’s Waukegan, Illinois office open house event on Saturday, April 20 to prompt her to allow legislation to pass concerning lifting the ban on rent control.

Residents are pushing to repeal Illinois’ Rent Control Preemption Act , a current law that prohibits discussions or studies to proceed on behalf of the state or local government agencies that would facilitate a discussion between voters for the possibility of establishing rent control measures.

Activists were there to support two separate bills introduced to lift the ban on rent control across the state: Representative Mary Flowers’ bill HB2192, and Representative Will Guzzardi’s HB255.

Mayfield is the Democratic Representative of the 60th Legislative District, who has served since 2010 and is a  member of the Illinois House Judiciary Committee.  Mayfield also serves on the Commercial Law subcommittee where she joined one other colleague, Representative Margo McDermed, in voting down  Guzzardi’s bill HB255, preventing its passage back into the Judiciary Committee. 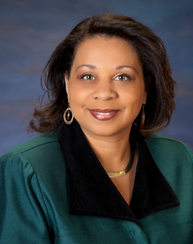 Representative Mayfield explained, “Why call a bill if you know you know you don’t have the votes to pass it? There was a lot of opposition that came with this bill, the language needed to be changed, and if you want it passed, you have to sell it or be willing to work toward consensus. No one reached out to me to ask for support, I never spoke to Will [Guzzardi],“ she said. “You can’t assume that because I have a ‘D’ behind my name I will just go along with it.”

Of the witness slips filed for HB255, 781 support the bill while 1349 filed against its passage. Of those opposed, most were professional investment firms, realtor associations, and lawyer groups.

Mayfield did say she favored the language in Flower’s HB 2192 that included funding for landlords to renovate and upkeep properties. She also supports efforts for more low-income housing to be built.

“We still have to do some building,” she said. “There was a lot that just has not been looked at yet. What about a pilot program for the city of Chicago for this kind of assessment to see what needs to be pushed effectively before we roll out policy that covers the entire state?”

Opposition to House Bill 2192 comes from supporters who favor the existing Rent Control Preemption Act, legislation crafted by the American Legislative Exchange Council (ALEC), a far right think tank, which passed into in law in 1997 through the Illinois General Assembly.

Rent Control Preemption Act (50 ILCS 825/). A unit of local government, as defined in Section 1 of Article VII of the Illinois Constitution, shall not enact, maintain, or enforce an ordinance or resolution that would have the effect of controlling the amount of rent charged for leasing private residential or commercial property.

House Bill 2192 would repeal the Rent Control Act and establish six regional rent control boards across the state, comprised of seven elected members each. Each board would have the power to establish local regulations for rent stabilization, impose a rent control fee which would fund a rental property repair fund, and allow each board enforcement provisions for properties within their jurisdictions. If passed, the first elections would be held in 2021, when the six boards begin operation and oversight.

Mayfield has been a local favorite for the district as the first elected black woman to represent the 60th district. Well respected in the area, Mayfield has also been supported by labor unions, raising over $200,000 in contributions during her political career, topping out most recently with a $12,000 contribution from Operating Engineers Local 150 via Chicagoland Operators Joint Labor Management PAC.

People United for Action chairman  Roderick Wilson made a statement on Facebook, regarding the need to lift the ban on rent control, "In Illinois, over 3 million people pay about 50% of their total income toward rent while 1/3 of all renters are paying over 30% of their income,” he said. “We need to regulate how rent increases are managed. Landlords can raise their rents, but we need some regulations on how much that increase can be to help stabilize communities.” 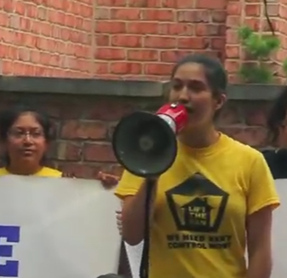 Activist Robin Peterson spoke outside Cullerton’s residence, “The working class should have the final say over what our communities look like and who gets to live in them. Not a few wealthy people who treat our communities like a commodity to speculate and gamble on.”

The Senate bill picked up several Democratic Senate co-sponsors, but ultimately never moved through procedure for a floor vote.

Opponents of repealing the prohibition law cited the state’s recent passage of a raise in the minimum wage as a move toward relief for renters. However, that raise doesn’t fully materialize until 2025 while rents continue to rise most every year.

Newly elected Democratic Governor J.B. Pritzker has expressed interest in repealing the Rent Control Act, but so far has made no move to do so, despite early pushback from the Chicago Association of Realtors during his campaign. A ballot referendum about repealing the state-wide ban passed overwhelmingly in three Chicago wards by 71, 70 and 66 percent during the same election that raised Pritzker to the highest office in the state, highlighting public support to explore this issue further. Governor Pritzker, himself a longtime private equity investor, is familiar with the property tax issues faced by residents and businesses in Chicago and across the state.

Chicago voters also elected Progressive candidate Fritz Kaegi, who was endorsed by Our Revolution Chicago as the new property tax assessor, after his opponent Joe Berrios was shown to have shifted $2 million through manipulating tax assessments in favor of wealthy homeowners, and applying the unmet tax burden to middle and lower-income families. That study was released by Municipal Finance Center at the University of Chicago’s Harris School of Public Policy before the primary election.

Tom Tresser, co-founder of The CivicLab, which highlights the TIF Illumination Project, has been focused on the problem of Tax Incremental Funding (TIFs) measures that have driven up property taxes across the city.

TIF's are subsidies for redevelopment, infrastructure, and other projects that use the projected increased tax payments that would be assessed on a finished project, as an advance payment to fund the building project itself. This then puts the entire area within the TIF district into a repayment plan of generally ten years or more, while the developer continues to pay the lower assessed value established before the project began. The loss of tax revenues from TIFs causes local taxing bodies to inch up their rates - resulting in higher taxes for all property owners in the city or municipality. This heavily influences property values and rents within the TIF district. 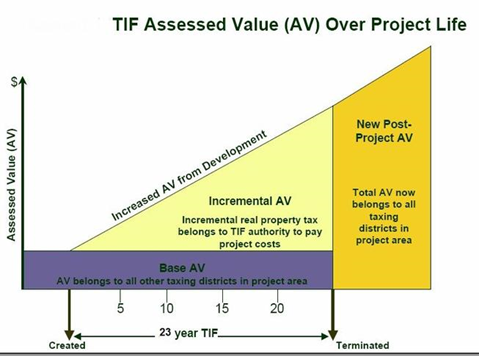 (Image courtesy of The CivicLab, “How Do TIFs Work” http://www.civiclab.us/wp-content/uploads/2012/11/TIF-diagram.jpg )

“Because property taxes are a granular part of our community and how bills get paid, the 145 TIF districts across the city and total of 1220 TIFs across the state have an affect on everyone. This means for Chicago alone we take half billion dollars off the table every year we should be collecting,” Tesser said. “That increases the burden on everyone else and all of our taxes go up.”

“Illinois has a regressive state income tax system and we don't collect the amount of revenue we should - as we are a very wealthy state. As a result, our local units of government rely too much on property taxes for such important services as our public schools. This means that there is a great deal of inequity across the state and it means that we must watch every dollar of property tax we collect and make sure it goes to the local units of government that rely on those monies to operate. And since about 50 cents of every property tax dollar collected should go to local public education - TIFs really hurt public education in Chicago and across Illinois."

Tresser argues that these tax policies make the case in support of lifting the ban on rent control.

“Renters are caught up in this mess with the property owners – everyone caught in this game. Simply look at who is protecting TIFs. Generally, these are developers, large building contractors, and law firms who love TIFs and oppose anything that suppresses their revenue. “

Next Steps for “Lift the Ban”

Vernon Township Trustee, Adam Broad, who is a member of both DSA and Our Revolution – Lake County, attended the open house event to discuss HB255 with Representative Mayfield, in hopes of moving the conversation forward. 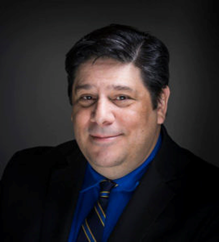 Trustee Broad voiced his frustrations, “We have a Democratic supermajority in Springfield right now with a Democratic Governor. There should be no question about the necessity of repealing regressive legislation to get this burden off the necks of working people.“ Broad continued, “I spoke with Representative Mayfield and was encouraged that she is willing to continue the conversation.”

No hearing date has been set for this proposed legislation.

related
The ABC Act, Platinum Coins, & Seignorage
The Green New Deal Will Save Fossil Fuel Workers & Their Communities
Community QE, Digital Greenbacks, and the Expansion of Democracy
Trans People at High Risk for Unemployment, Study Shows
My Case for a Livable Wage
Help Save the USPS From Privatization
We Can Prevent a Great Depression, It'll Take $10 Trillion
Christian Progress
more news you may like
Gotham Is Burning
Sign In to Dine In
Propaganda Weaponized
more by author
Sex, Celebrity and the Inconvenience of Poverty