How the Elite Stole MMT

When we talk about MMT, we almost invariably hear at least one person who argues that their tax money does in fact fund federal spending, and that we're crazy for peddling this nonsense. The conversation then turns to the 2018 national defense budget. That's a good place for it to go.

The introduction of this event is integral to helping people understand that Federal spending does not require tax dollars, but it's more than that. Not only is it confirming evidence of US monetary sovereignty, it's also evidence that the elite of this country are already using it to personally enrich themselves. While we could all be using it to ensure full, productive lives for everyone, investing in the public purpose in the process, a large portion of it is simply created from nothing, and deposited directly in a handful of personal bank accounts.

But how can we know they are doing this, and how are they doing it? Well first of all we can view a general accounting of everything that budgeted money was spent on.

From that, we can see exactly what that money went toward. We can infer which corporations got which deals with a bit of research, and for how much. For instance, we can determine that Lockheed Martin produces the F-35 jets that the budget procures 56 of, and that Boeing produces the Apache helicopters that are budgeted for. More importantly perhaps, we can see the ratio of money that went to actual people in the military, versus private contract.

...Which brings us to how they accomplish their lucrative feats: by private contracts, funded by congressional mandate. Of the 1.3 trillion dollars allocated to the military budget, only about half actually went to the military. Of that, the average soldier saw a 2.4% pay raise, and little else. Of all of the areas where servicemen and women could have stood to see gains, instead they only saw small increases in overall pay, and select housing subsidies. All the rest of that money went to deploying more troops in Afghanistan, and recruitment in general. The focus was on recruiting more soldiers, rather than supporting the ones we already have. 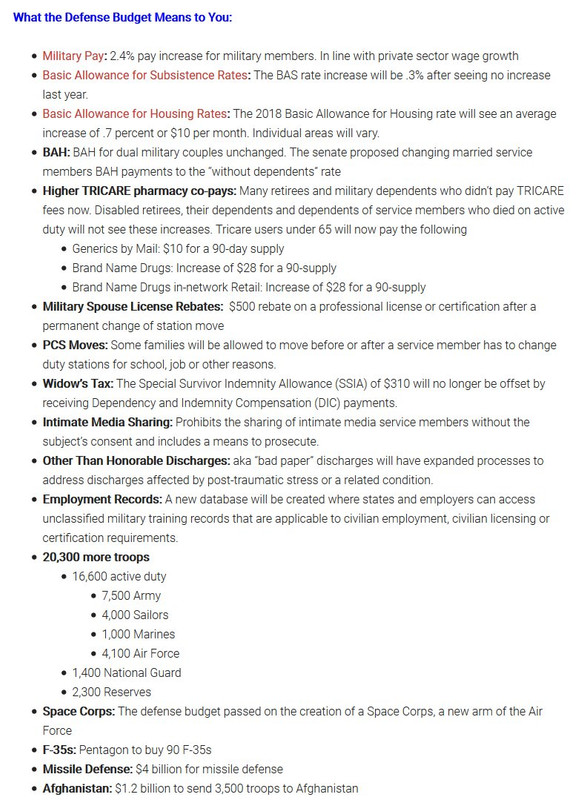 The other half (or close to it), went to private contractors like Boeing, Haliburton, Lockheed-Martin, and Raytheon. Of that money, it's hard to deduct a sound ratio, but CEO's take home about 300% what the mean employee nets in the US, on average.

In other words, private military contractors name their price, Congress passes a budget, and authorizes the Federal Reserve to fund it from nothing. We hold no special tax drives, and have no need to 'find' the money for this, we just authorize budgets when we have to. The end result, whether it's intentional or not, is that CEOs of these private corporations are using our country's monetary sovereignty in order to personally enrich themselves.

And people wonder why the elite would want to perpetuate lies about our how our economy works... This is one reason why. There are more reasons, such as the division caused by two opposing factions of the deceived. We forget that this is the perfect, unwinnable conflict at our own peril. Both sides fight over how to balance a budget that shouldn't be balanced, while we are diverted from the untidy process of sausage-making in US politics.

Since the US is monetarily sovereign with a currency which is not tethered to the value of any finite resource, what these people are doing is basically keeping their leprechaun, his pot of gold, and his rainbow, hidden from everyone who might want to use it for themselves. It is literally a case of money being called forth into existence from thin air, simply by virtue of US constitutional decree, and going straight into the personal, private accounts of a select handful of people.

As big a deal as this will be to a lot of people, this is actually just a small facet of a much larger problem in the US military, where privatization is taking over public military functions at an alarming rate.

As many have no doubt already surmised, there are many problems with this: Firstly, our government is not supposed to be a profit-driven business, it's supposed to supply a service as efficiently as possible. Second, there were abounding problems with objectivity, insider mishandling, impartiality, abuse of the system, conflicts of interest, and corruption in general.

When someone puts their life on the line, while becoming more aware every day that they are doing it solely to pursue a lucrative, money-making scheme for someone else sitting comfortably in a penthouse office suite, that is a demoralizing situation for anyone to have to endure. They are not even allowed to bid on their own behalf, their value is set with a signature from someone else's hand.

‘I felt exactly how you would feel if you were getting ready to launch and knew you were sitting on top of 2 million parts — all built by the lowest bidder on a government contract.’ Attributed to John Glenn

While a multi-front approach will likely be most effective at engaging as many people as possible about MMT, what's really a shame, is that some people will become alarmed when they realize someone is getting something for nothing, but aren't when people that work all their lives can't afford long-term cancer treatments. Both are side effects of the same thing: a deliberate suppression of how our economy, not to mention our Constitution and government, are actually supposed to work.

What's happening is that our national monetary sovereignty is being used to give private military contractors an unfair monopoly, along with the ability to basically name their own contract price, and the ignorance of what monetary sovereignty really means is being used as the excuse to cut social programs as a result. The budgeting happens when people need necessities, not when the military industrial complex wants money. They are always the standard by which everyone else's needs are prioritized by.

Ultimately, no matter how people arrive there, the more people who learn MMT, the better. We cannot remain ignorant about MMT if we respect the subject enough to study it, and others cannot remain in that state if we can show them the light.

Each one, teach one!

related
The ABC Act, Platinum Coins, & Seignorage
The Green New Deal Will Save Fossil Fuel Workers & Their Communities
Community QE, Digital Greenbacks, and the Expansion of Democracy
Trans People at High Risk for Unemployment, Study Shows
My Case for a Livable Wage
Help Save the USPS From Privatization
We Can Prevent a Great Depression, It'll Take $10 Trillion
Christian Progress
more news you may like
Gotham Is Burning
Sign In to Dine In
Propaganda Weaponized
more by author
FJG vs. UBI: An MMT Perspective
Oligarchy 101: Ray Dalio Rewrites Economics to Place Corporations at the Center
RP's Own Kerri Barber Talks About What Nonprofit Certification Means for Real Progressives!
Our Disposable Culture
MMT isn't 'Close', it's 'Here'.