Are You Ready to Consider that Capitalism is NOT the Real Problem?

Abject disdain for capitalism: you see it everywhere these days.

Terms like 'late-stage capitalism' are used to portray a picture of capitalism as an incurable disease, with no end but death. When it's not the main target of derision, it's mentioned casually as a kind of support structure for the evils of racism, sexism, colonialism, militarism, fascism, imperialism, homophobia, Neoliberalism...every single bad thing. In the view of many, those things literally equal capitalism.

This view is limited, but not due to a lack of understanding. It's simply a matter of terminology. Although the wording may seem trivial at a glance, the terms are important, and they deserve discussion and proper distinction. Though this is a point of contention, just keep in mind if we weren't already on the same page as fellow progressives, then we wouldn't be so quick to brush these differences off.

Another encouraging thing, is that when you actually get these anti-capitalist peeps to talk about it, you find that you are still on exactly the same page. You both hate US corporatism. You both think they've got a much better handle on things in Scandinavian countries. Again, the problem is one of terminology. The capitalism they rail against simply isn't what they think it is.

Meanwhile what really IS much closer to the ideal, enduring capitalist state, they call 'eco-capitalism'. The fact their alternate term for 'Nordic Model capitalism' also has the word 'capitalism' as its root, doesn't seem to bother them. The fact Scandinavian countries already have a system where they mitigate the inherent dangers of capitalism's use as a tool with the tenets of social democracy is also a moot point, it seems. They talk about how wonderful Norway is until they're blue in the face. In the next breath they say, "Capitalism is inherently evil, and must be destroyed!"

Do you see the problem?

Although the ideas remain the same (only the terms differ), these distinctions are obviously significant.

At its most basic level, capitalism is a tool to create profit. That profit could mostly be directed at the wealthiest portion of society, as is the case in the US, or that profit could be directed at EVERYONE, potentially eliminating poverty completely. This would be done as profit allocation is already done, by enacting legislation. One example is the legal limits on the price of certain prescription drugs here in the US. According to a policy paper written by the Yale Global Health Justice Partnership:

There is much that the federal government could do to lower drug prices via both legislative and executive action. Over the past few years, there has been some discussion about the problem of high drug prices in Congress, but few serious proposals for drug price reform.

The problem with that particular example is those limits are already so high that one might ask, "why even bother?" The reason why is because if there was no limit to the price, there would literally be no limit to what Big Pharma would charge. This can already be confirmed, as US drug prices scrape the ceiling each time the legal limit is raised. The point is there are some constraints we in the US have placed on capitalism, and it is one of the things that makes our economic system what it is in our society. And what it is, is arguably NOT capitalism anymore.

While 'supply and demand' is a well-established component of capitalism, its constraints are limited by the human beings who use it. They have the freedom and ability to regulate that all by themselves. They do not have to charge desperate people more than is fair. They do not have to exploit the needy workers to exchange their labor for a comfortable living. Nothing about capitalism says that they must do either of those things. It is a case of the opportunity provided by capitalism being exploited by unethical people, and a lack of regulations to prevent that exploitation.

Capitalism isn't just about owning the means of production, it also depends on a free market. What you have in the US is a situation where millions of baby fish are encouraged to eat each other, while the whale sharks circling above wait and watch for fat fish to rise to the top where they are immediately absorbed to neutralize their threat. That's not free competition anymore, it's corporatism. It's corporate serfdom. It's parasitic.

It's not hard to see that corporate interests want to burn the bridge they used to get where they are: in fact, that bridge is already on fire. It's also not hard to see why they would want to. Corporate America has already used its vast fortunes and influence to legislate in its own favor, greatly reducing the fairness of the free market. This is part of the mechanism that allows parasites to feed off of us.

That's not what capitalism is supposed to be. In an ideal capitalist state, workers and owners/management have a mutual respect and appreciation for each other, and a shared knowledge of their interdependency.

But instead of having gently tiered pay, where those with slightly more responsibility get paid a little more, what you have in the US today is a CEO bubble that's impossible to enter. The average CEO : worker pay ratio is reaching toward 300% currently, and it's already the highest in the world. The reason for such a large pay gap is both because executives make so much money and because workers make so very little. The relationship seems obvious, but the significance of low-end pay should not be overlooked.

When your workers teeter on the verge of poverty, that situation is not sustainable. That's what makes it corporatism, rather than capitalism. Captialism is sustainable, and Corporatism is not.

But, in this day and age, if you so much as let on that you support capitalism, you will be mocked and called everything from a Nazi to a corporate sympathizer to a capitalism apologist...by fellow progressives, no less.

The lie was intentional. It was designed to cement a wall between the ideas of capitalism and socialism, and it's been an ongoing psy-op for a long time now. In a 2016 Harvard poll, the polled were asked if they identified as and/or supported six different ideas, if any applied at all. Emphasis was placed on the number who rejected both identities of socialism and capitalism, but there wasn't even a mention of the number who identified as both. The way the data was collected might not be an issue, but the way it was presented certainly was, and that wasn't the only way this poll was used for such a purpose.

The poll was basically designed to determine if voters would 'settle for Clinton' in order to avoid Donald Trump, and to that end they completely avoided asking people's opinions about a matchup between Trump and Bernie Sanders. They hold up the results of a 'Clinton vs. Trump' matchup as if they were conclusive, and don't even ask about a 'Sanders vs. Trump' contest. To say this was designed as mediafood, to be mass distributed and consumed, is an understatement. This is how the question was worded in the poll:

"If the election for President were held today and the candidates were Hillary Clinton, the Democrat, and Donald Trump, the Republican, for whom would you vote?"

In the same way, the results of the following questions were presented as you see them: 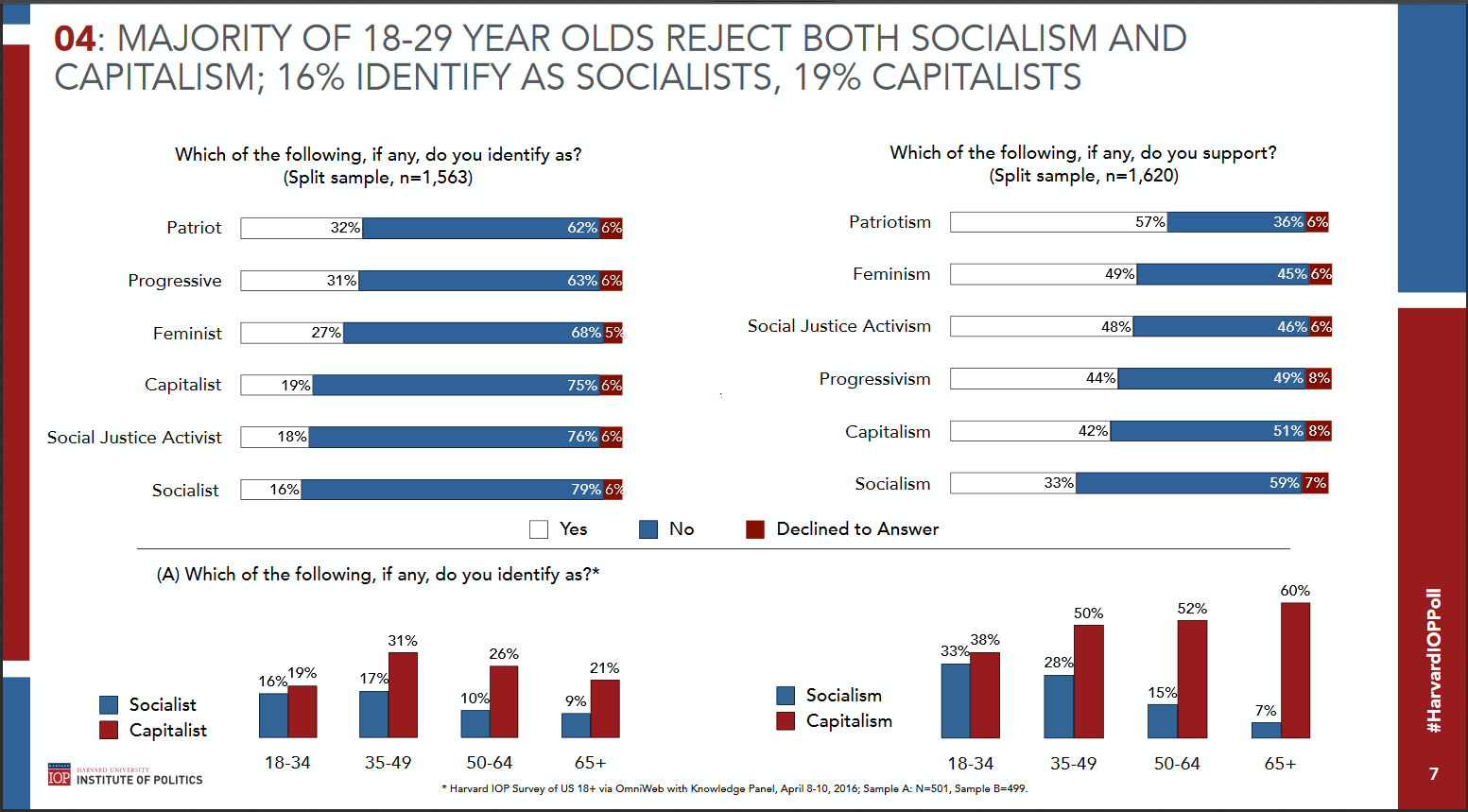 The result was that many were gravely mislead to believe that socialism and capitalism were opposing forces, like matter and anti-matter, and if they ever came together the universe would implode. They could not exist together. One could not be both things at the same time. 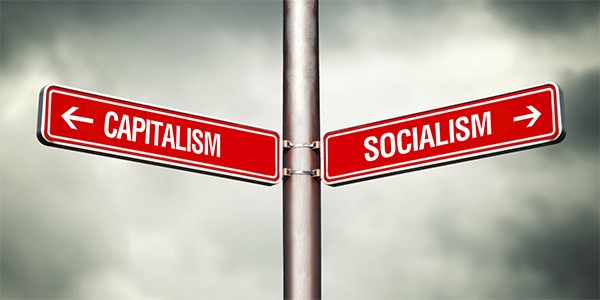 This same gaslighting could be seen during the second democratic presidential primary debate in 2016, hosted by Anderson Cooper. During a crucial moment in the debate, after Bernie Sanders had explained why he was a democratric socialist, Anderson Cooper asked Bernie Sanders the following leading, loaded question: "...You don't consider yourself a capitalist though?" He did this knowing full well the implications of either (A) Bernie Sanders embracing capitalism, or (B) Bernie Sanders trashing it.

If it was (A), considering the widespread misconceptions common at the time, Cooper knew Sanders would be perceived as naive, or worse, a corporate shill, as well as a socialist hypocrite. If it was (B), he could easily be maneuvered into position for more socialism gaslighting, painting him as something else besides an American; as an outsider. The only other scenario would have Bernie fumbling over the question, looking clueless and unprepared.

Sanders' response, however, was just about perfect. Instead of falling into either trap, he set up a distinction between what he called "casino capitalism" and regular capitalism. By doing so he not only dodged a disengenuously placed bullet, telling the truth in the process, but he conclusively communicated his view that what we have in the US is something other than capitalism. It was 'casino capitalism' that he railed against, not capitalism.

Not only did the establishment attempt to use the illusion to gaslight socialism as running totally counter to capitalism, but as a way to gaslight capitalism as something that is simply corrupt by necessity, and cannot be changed; something that just is what it is, innately. Both ideas are not only flatly false, but extremely dangerous.

And when people talk incessantly about the evils of capitalism, they are furthering this agenda, while they perpetuate status quo, business-as-usual politics.

Also important to consider, is the source of most of this anti-capitalist rhetoric: ANTIFA, and various Marxist/anarchist groups. I'll just leave that right there. One can do their own research about those groups, and the monied interests who fund them.

One last important thing to consider, is the motivation behind those who would want a mass movement against capitalism. The free market is already all but lost, and the only thing keeping our economic system in the US within the realm of capitalism is our ability to generate our own wealth, and start our own businesses. If corporate America is burning the bridge they used to get where they are, why wouldn't they want it to collapse all together? Nothing protects corporate interest more than its ability to criminalize competition.

So when you say you want to "destroy capitalism," or that "capitalism is evil," remember that you're using the wrong term. You're only saying that because of the way capitalism has manifested in your own country, and that is not only short-sighted and ethnocentristic, it's nationalistic. The term you're searching for is "corporatism." Though this distinction may seem insignificant, it's not. Not only does this lack of accuracy in your terminology undermine your own right to have a yard sale, it makes you look like you don't know what you're talking about, and that undermines the entire progressive movement. It also serves to divert attention away from where it belongs, and that is dangerous.

There is too much at stake, and absolutely no time to waste.

related
Propaganda Weaponized
Sanders Delegates Join Fight to Keep NY Presidential Primary
Let Off The Hook...Again?
Now that Joe Biden is the Nominee, How Do We Save Democracy?
Never Enough
Michigan Election Fraud
BernieBros is Gaslighting
Are Democrats Over?
more news you may like
Gotham Is Burning
The ABC Act, Platinum Coins, & Seignorage
Sign In to Dine In
more by author
FJG vs. UBI: An MMT Perspective
Oligarchy 101: Ray Dalio Rewrites Economics to Place Corporations at the Center
RP's Own Kerri Barber Talks About What Nonprofit Certification Means for Real Progressives!
Our Disposable Culture
MMT isn't 'Close', it's 'Here'.